The new UK USB charger (part #  MGRL2B/A) includes a folding pin design – but isn’t that much bigger than a standard charger. 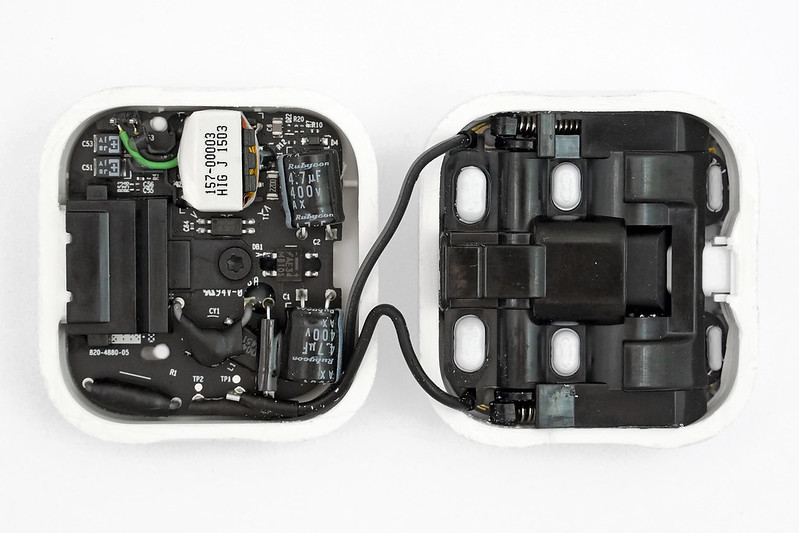 Rather than prying the mouldings apart and potentially damaging something in the process, I cut the rear casing in two using a fine toothed coping saw. Luckily I cut in exactly the right spot so it comes apart cleanly. It’s designed in two halves – the front half containing all of the mechanism and insulation and the second half containing the PCB with active components and USB socket. 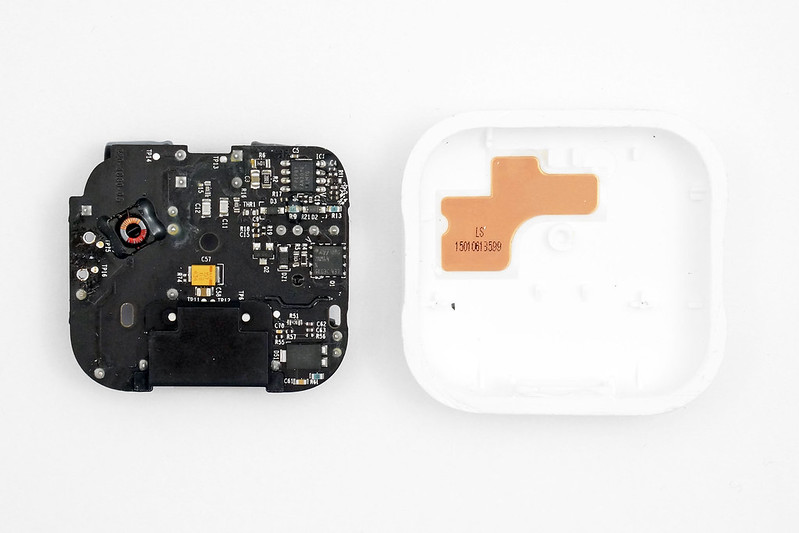 The rear half of the housing has some copper shielding behind a plastic film – presumably to meet EMC standards. 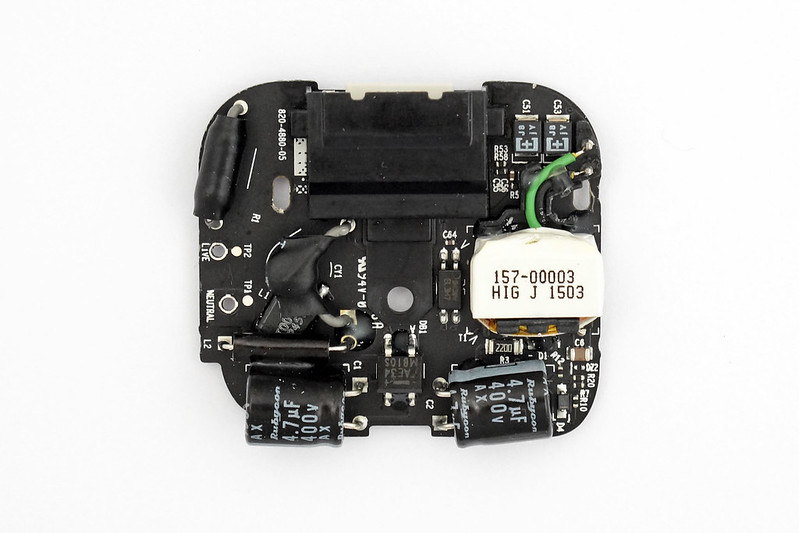 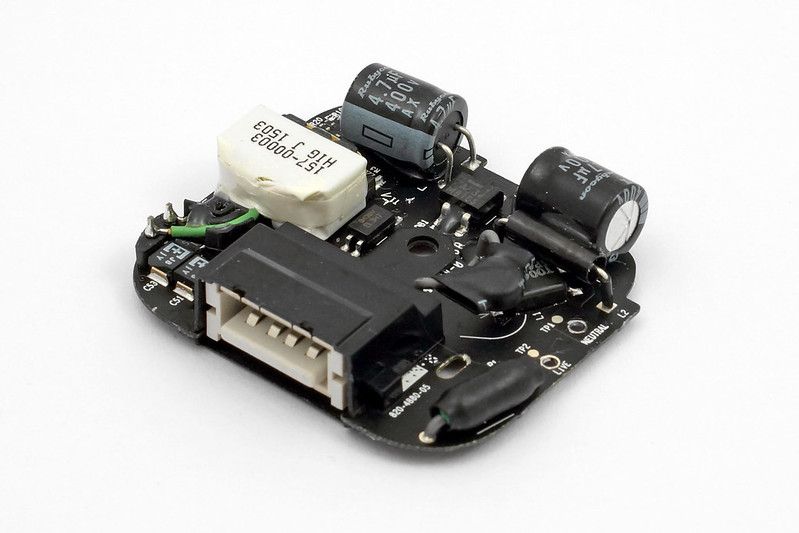 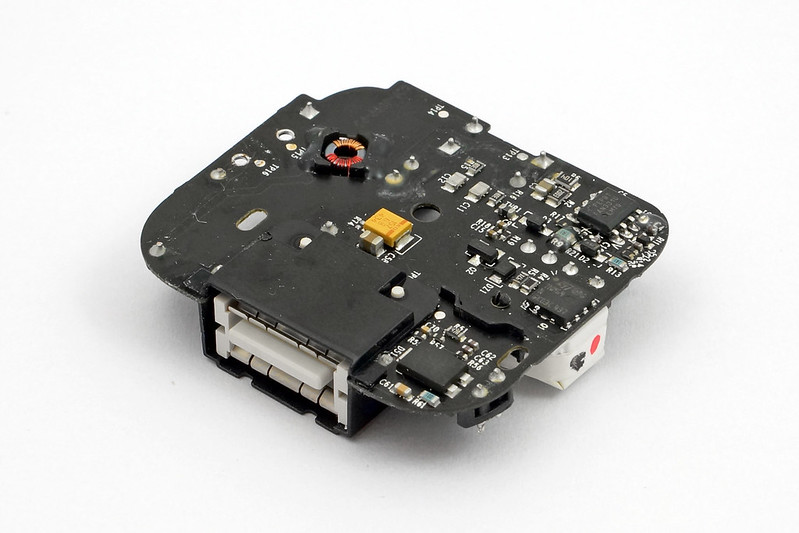 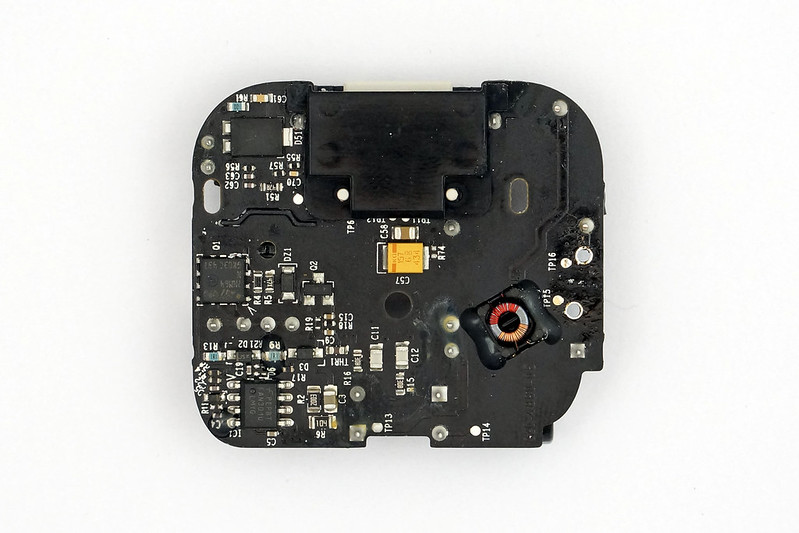 On the underside there’s a low profile, recessed inductor (markings T00405 SP451), a tantalum polymer capacitor from Kemet (part # T520T156M006ATE100 ) and what I think is a power MOSFET from Fairchild (part # STD7NM64N) but in a custom package, Fairchild’s PowerFLAT 5×5 package. The other large component is a diode (part # SBR8U60P5). Interestingly there is a blob of resin over R9 for an unknown reason.

What is surprising is the use of a low power PWM controller from Fairchild (part # FAN301). The FAN301 was released in 2010 and achieves a standby power of less than 20mW. It is currently marked as ‘This particular part was found to be patent infringing and we are unable to sell this product.‘ on Mouser. It appears to have been replaced by the FAN302 in 2013 – achieving a standby power of half; just 10mW. I’m not exactly sure why they are using this PWM controller for the above reasons, but it does hint that this charger design was a long time in the making. The FAN301 has a permanent injunction against it from Power Integrations (more on the story here). 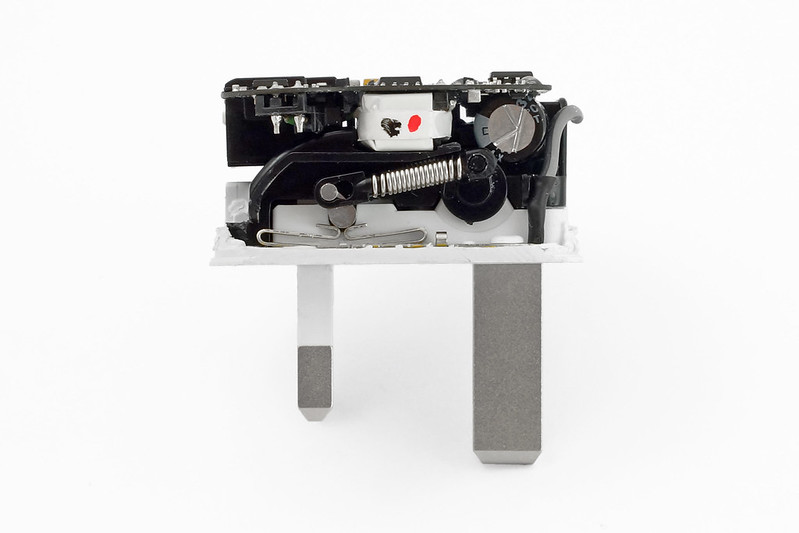 Cutting away the side of the charger face reveals the contacts. 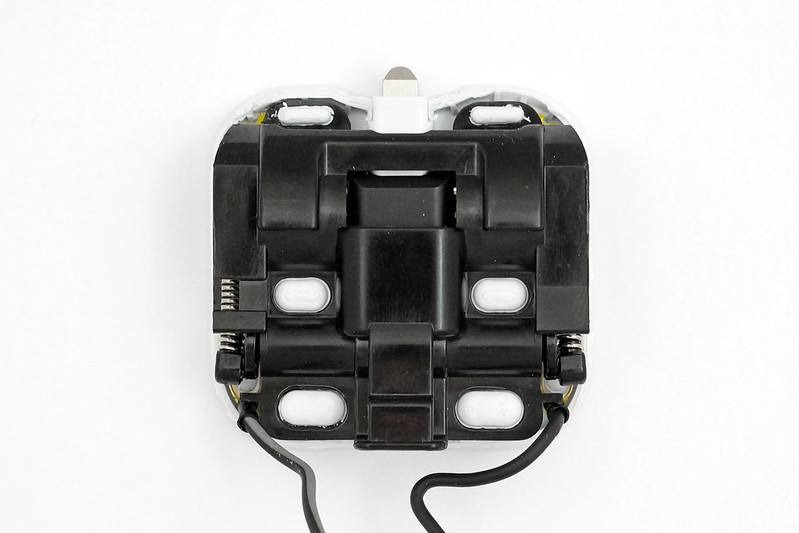 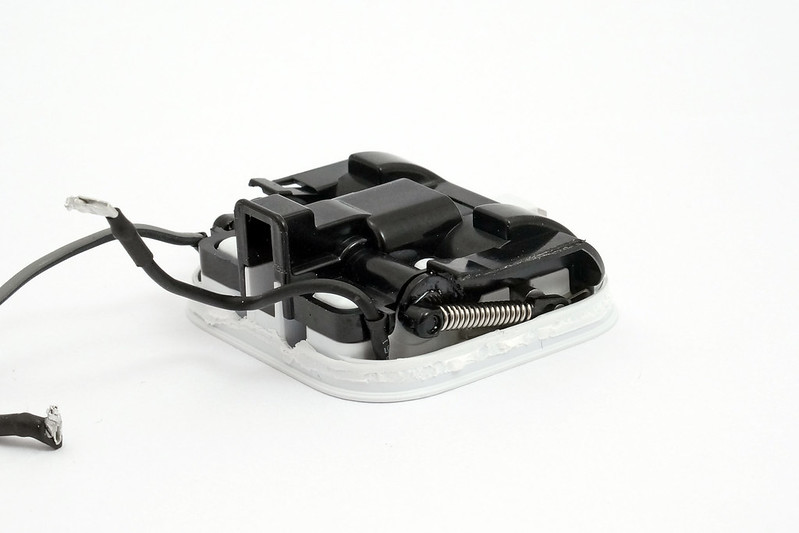 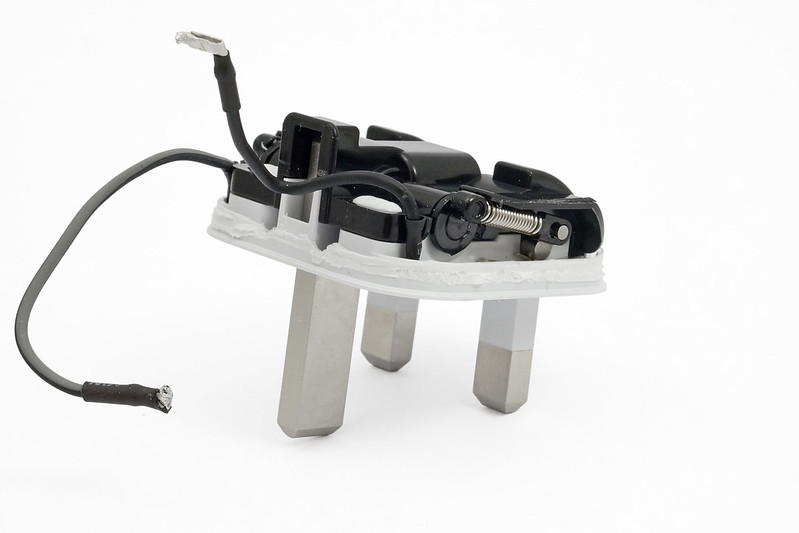 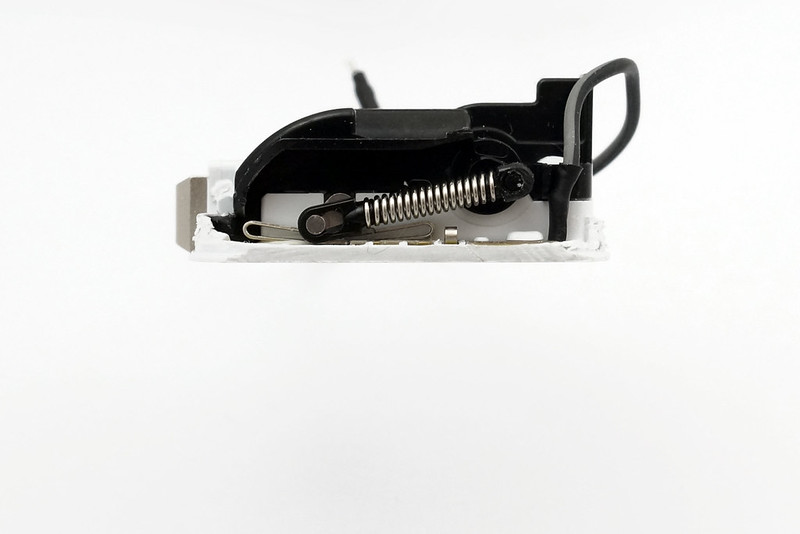 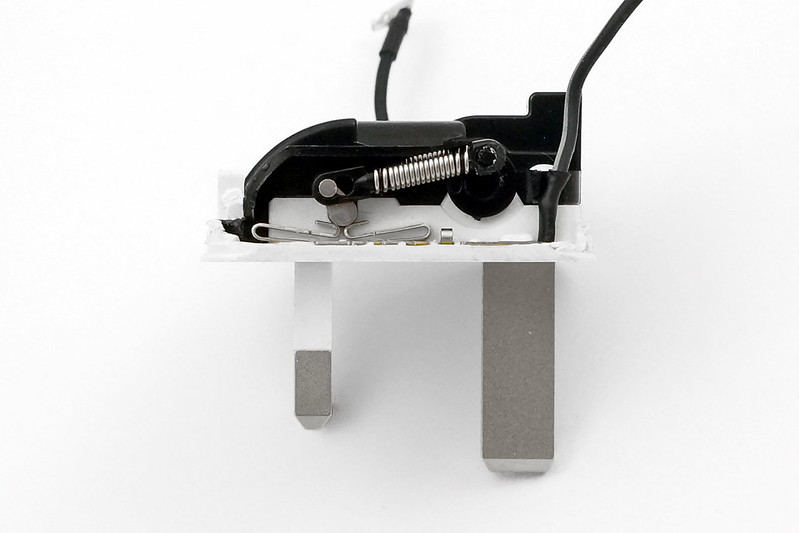 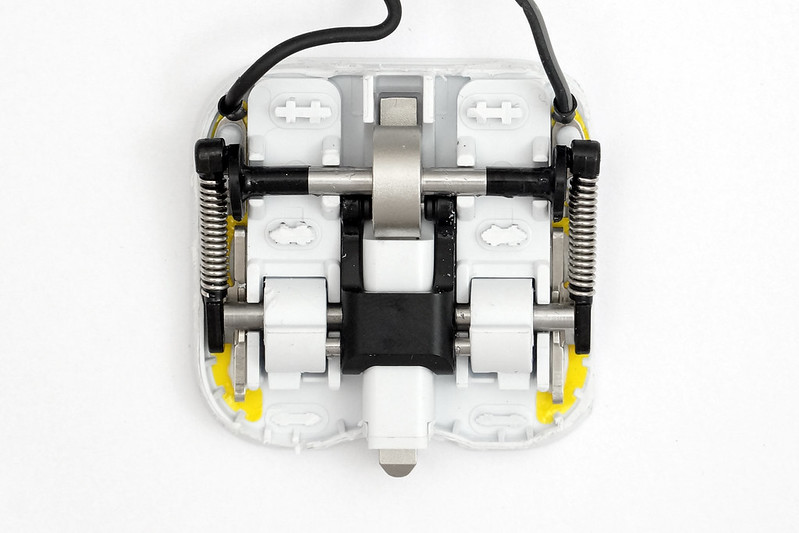 The top cover has been fixed in place using overmoulding – once these overmoulded points are cut off, you can finally see underneath the cover! All of the parts feel solid and there’s very little play when the mechanism moves. 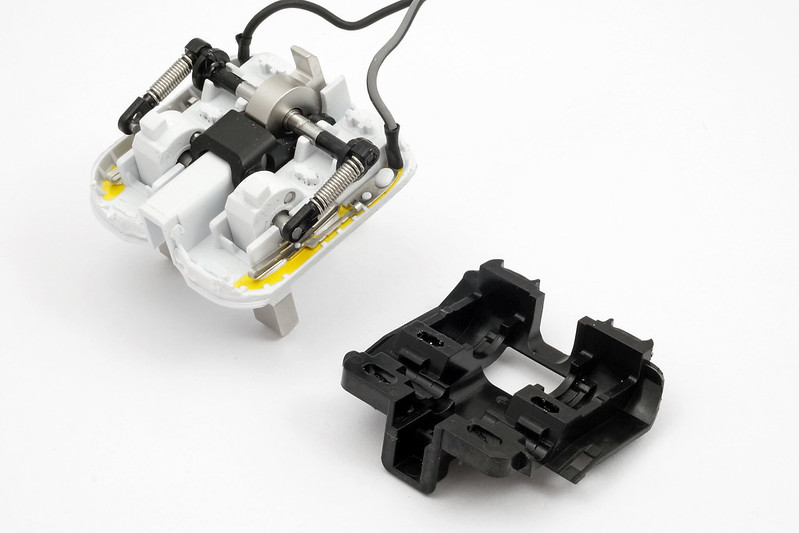 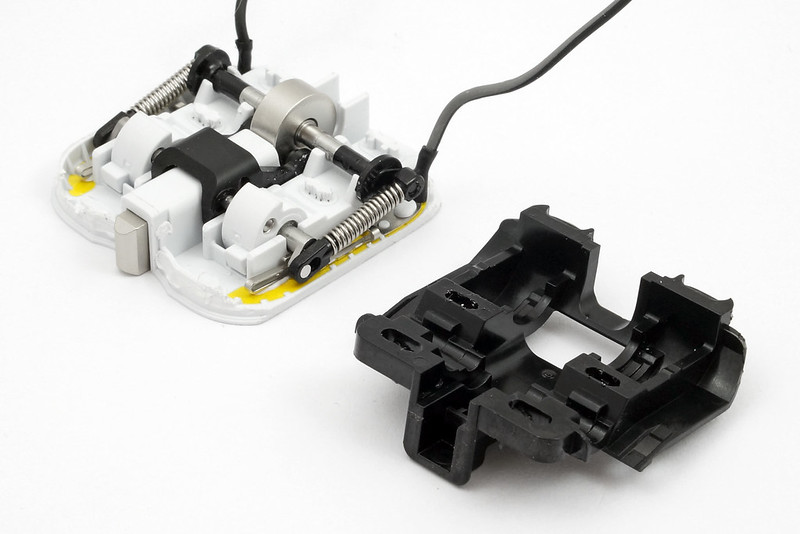 Underneath each mains contact is a thin layer of Polyimide (the yellow material) cut to shape – This is a high temperature, electrically insulating film. At a guess this is to meet insulation requirements.